Fast Familiar make audience-centric theatre, so this guide to making theatre is written from the perspective of creating interactive - but at least 8/10 of these points apply for devising theatre in general. We learnt these through bitter experience, so we wanted to share them to save you the hassle of also making really bad mistakes. You’re welcome.

Create theatre stuff. Test it and figure out what doesn’t work. Make version 2. Test it. Rinse and repeat. If you’re working in groups, change up who is working on the idea - maybe don’t change everyone at the same time but keep bringing new perspectives in. Don’t worry about getting it right the first time - just make something. You can always change it after. The obsession with making something perfect can bring a creative process to a grinding halt and leave people frozen with fear.

Have too little time - what Anne Bogart calls exquisite pressure. Having too much time often results in people making something good and then talking themselves out of it in the time they have left. Having too little time means people can’t waffle on. Lots of people feel insecure in environments where people who they perceive as cleverer than them waffle on; lots of people didn’t have a great time in a school environment and allowing the making room to feel like this can trigger a lot of negative associations. Having too little time also means that people let go of the idea of making the perfect thing; it’s impossible to make the perfect thing in 15 minutes so they actually cut themselves some slack and stop aiming for perfection. Creating theatre is all about making something a bit crap and then improving it.

Want this for keepsies?

We did a project with young people with autistic spectrum condition; through that process we were introduced to the idea of when/ then. When we have put our shoes on, then we will go outside - it’s a way of explaining things which means people know what to expect: this can help some people with autistic spectrum condition to feel comfortable. It’s also a great principle for interaction: when they have seen the door, then they will go through it. Don’t just assume they will go through the door - they need to see and register it first. Sounds obvious but it’s very easy to fall into the trap of expecting the audience to know what you know. We’ve now banned the phrase ‘and then they realise’ - how will the audience realise that they need to take the boxes off the shelf? Don’t assume anyone will realise anything. Create the conditions for them to see, register and understand something.

4. The first rung of the ladder

Hospitality is a big thing for us. The word hospitality is related to the word hostility. The root hospes is allied to the root hostis, which means both ‘stranger’ and ‘enemy’. So hospitality, as in hostilis (stranger/ enemy) + potes (having power), originally meant the power that the host has over the stranger/ enemy. You have power over the audience; don’t abuse it. We think you have a massive duty of care in audience-centric work. We also think that if people are relaxed, they engage more. Often our work puts people in unfamiliar surroundings or relationships, so we try early on to give them something familiar, so they think ‘oh this is a bit like this other thing I know’. It’s like putting their hand on the first rung of the ladder; they don’t know where the ladder goes but they know it’s a ladder and now they’ve found it they can start climbing.

As part of your process of creating theatre, make a list of everything that could happen during a performance, and what you will do. What if the fire alarm goes, what if there’s an aggressive drunk person, what if someone goes into labour, what if the tech breaks. Think of everything. Torrential rain, theft of equipment, alien invasion, actors arrested, zombie apocalypse. You will sound like a little extreme but it means you will have a plan whatever happens. You can read more about how we use a Chaos List here.

6. The power of titles

With audience-centric work, the contract you have with the audience will probably be specific to your piece. It isn’t like traditional theatre (you will sit in the dark, you will be quiet, you will applaud, you will leave) so you have to generate your own expectations. You can do this with everything the audience member encounters before they come - description, image but most important title. There was a psychological experiment in which two groups of people came and played the exact same game. One group was told they were playing The Co-operation Game and the other group were told it was The Wall Street Game. Their behaviour was completely different - because the titles had led one group to expect collaboration and the other to expect to screw each other over. So in creating theatre, think about the expectations you want the audience to have, and how you can generate them with the title.

This should actually be number one in the guide to making theatre. When you are devising theatre, be clear what mode you’re in. Are you making or critiquing? If some people are making and others critiquing at the same time, the making people may start to regard their critiquing pals as haters. The critiquing people are of course trying to help but it might not come across as that. State what you’re doing so everyone is clear - maybe you’re making for 45 mins then critiquing for 30 mins. Maybe you feel you’re naturally better at or more inclined to one than the other. Observe the tendency in yourself but see if you can work to the needs of the group in that moment.

We like to have a structure to hang content on when we’re creating theatre. The audience doesn’t need to know what the structure is - just like someone you meet doesn’t see your skeleton, they just see what you’re wearing. We borrow from all kinds of places – we’ve used the structures of psychological experiments, Kubler-Ross’s 5 stages of grief, and classic story structures like those described by Robert McKee in Story or Vladimir Propp’s Morphology of the Folktale. Most audiences don’t see structure but they will notice when it’s not there. A lot of really good structures already exist – you don’t need to invent them, just borrow.

When the TV series Miami Vice went massive, they had to grow their team of writers. Working to tight deadlines, the new writers had to quickly get on board with what we might call the ‘feel' or ‘world' of the show. The team developed a shorthand: ‘that’s Vice/ that’s not Vice.’ Ideas that were Vice were consistent with the world; ideas which were ‘not Vice’ might be fantastic ideas, but they were not right for this particular TV series. Sometimes when you’re devising theatre someone has a great idea but it just isn’t right for the show. So we say it isn’t Vice. Sometimes people even say it themselves. It’s a way of keeping on track without anyone feeling their contribution is unvalued (hopefully!)

If in your process of creating theatre, you’re iterating and asking for feedback, own that space. If you ask ‘what would you like to see more of?’ the person’s response will tell you about their tastes (dogs?) but not necessarily about the show you’re trying to make. Ask specific questions which will get people to reflect on their experience. Look at Liz Lerman’s Critical Response or other models which allow the artist to find out the answers to questions that are useful. Feedback on the costumes when everyone is still wearing their own clothes because you haven’t addressed that element yet is not helpful. Nor is someone telling you to put a pug in your show because they can’t get enough of dogs. Also, think about how you do feedback. If you do it in a group with everyone talking, will you be able to take it in? (Record it on your phone.) Will you hear the diversity of responses or just the loudest voices? If you get people to write stuff individually before any discussion you avoid convergent groupthink and you’ve got their responses to look over later (if you can read their handwriting...) 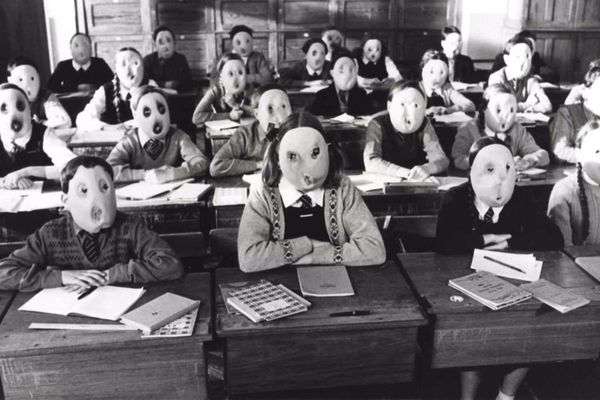 Here’s some pointers on how to devise theatre and look after the audience while you’re putting them at the centre of what you’re creating.

Distilled from years of thinking about different types of theatre and how to make them, here are the seven questions that underpin our process.