In 2015, we made our first immersive theatre piece which used A LOT of technology and no actors. It was a super-steep learning curve which continued its ascent well into the 3 week run, as we played what felt like a version of whack-a-mole with all the things we hadn’t anticipated going differently or - well, wrong. I have a strong memory of sitting shell-shocked with Non Zero One’s Cat Harrison, as she introduced us to the concept of the Chaos List. A chaos list, she explained, was where you listed everything that could possibly go wrong and then you figured out what you would do when this happened.

No time to finish reading this now, or want it as a document to refer to next time there's chaos?

A emotional risk assessment within the creative process

A Chaos List is a bit like a risk assessment but falls within the creative process. Often in theatre, a risk assessment is done by the production manager or producer, and it tends to be more about the get-in (when the set is built) than the show itself. Of course it’s very important to make sure that no one gets hurt while building at the set - plus in regular theatre, the audience aren’t likely to do much that will constitute a physical risk because they will be sat in their seats, watching. But I do think it’s interesting that this division of responsibilities means that the director, writer, and performers don’t habitually think about risk - and within that, the effect that their creation might have on the people experiencing it. Because risk isn’t just physical.

Back to Non Zero One and their Chaos List. Like FF, NZ1 make interactive artworks - where they are making explicit invitations to the audience to do things which will shape how the experience plays out. For each artwork, they make a list of everything that could go wrong and what they’ll do. For every project after Invisible Treasure, we’ve done this. We anticipate how theatre can go wrong. We think about everything. Things the audience might do - what if someone is drunk/ abusive/ goes into labour/ takes a call on their mobile phone mid-show/ has to leave? Material things beyond your control - what if there’s a power cut/ fire drill and you have to evacuate - how and where do you start again? Things to do with the mechanics of your show - internet failure, a device runs out of battery, a lock breaks, the audience don’t manage to erect the bio-tent in time? Emotional things - what if someone is upset by something in the show or something another audience member does? All this goes into the Chaos List.

How to not get lost in the chaos

Making this list can be a potentially overwhelming experience. I remember the afternoon we spent making the chaos list for Disaster Party (which, as the name suggests, was kind of a high-risk show). As the list got longer and longer, I remember Delme looking increasingly worried and finally saying ‘I don’t think we can do this show’ (the show we’d just spent 2 months making) because so much could go wrong. We took a break and came back and figured out how to move forward - but do be prepared for it to feel like A LOT. Or for people to not do it properly because they don’t actually want to think about how bad things could be.

We now do Chaos List in two phases. We do the ‘what ifs’ as a game, where the object is to stay in longer than anyone else by thinking of more ‘what ifs’ and not having run out when your turn comes around. At that stage we’re not even considering how to deal with the chaos, we’re just identifying it. We all know why we’re playing it as a game but somehow it still works - and gazing into the abyss of chaos can be approached with humour. Then we go back and we figure out how to handle each instance of chaos - because actually that’s a very different mindset, it’s like knowing if you’re in create or edit mode.

I’ve gradually come to realise that the Chaos List is a dramaturgical tool. By identifying all the things that can go wrong, you often show up the places where the audience might be confused - and you can clarify your invitation to avoid this. Other fixes aren’t rocket science - we always have a spare iPad when we do The Justice Syndicate in case one of the audience’s devices stops working. Sometimes a chaos factor is too big and you choose to make a significant change to the show to remove it. The first system that ran The Justice Syndicate needed the venue to have fast reliable internet. We soon realised that this was too big a chance to take so Joe rewrote the system to run on a local network. The audience wouldn’t know the difference but it meant we all slept better the night before turning up to a random place to do the show.

Different experiences are inviting different types of audience involvement so will need different measures - in Disaster Party we had a Non-Player Character (a term from video games, LARP and role-playing games for a character who is not controlled by a player but by the game moderator or designer) who was nominally the ‘butler’ of the house where the experience took place. We don’t normally have a human moderator but for this show, it solved many of the problems that had made us feel so dispirited when we first made the chaos list.

Our approach to the Chaos List and to emotional safety has definitely evolved as we’ve interrogated our role as experience designers - and what our responsibility is. We feel like the more you care for your audience, the better your show will work - and that it’s not just about considering what you’ve made, but also how the ugly structural inequalities of the world might play out within your experience. It’s not easy but the more we can ‘normalise’ the idea of an emotional risk assessment, in the way that no one would do a get-in without a physical risk assessment, the more inclusive and transformative our artworks can be. 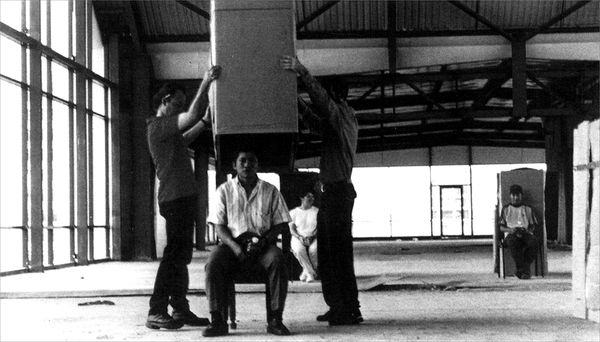 A ‘literature review’ of audience-centric work that sits outside the comfort zone, including artworks by Davis Freeman and Jamal Harewood that are some of the most powerful experiences I’ve had in theatres.

How should we care for audiences, what are theatre companies responsible for, and what do we discover when we start asking questions about the ethics of interactive theatre?