‘Back to normal’ seems like the phrase of the moment. As hairdressers and pub gardens open and maybe theatres in a couple of weeks, there is a sense that things in England might possibly start feeling like life pre-pandemic. And they kind of are, but -for me- this expression ‘back to normal’ doesn’t capture where I’m at. I don’t feel like the person I was in March 2020, or even like that person plus 14 months. I think the pandemic has changed me and what I’m thinking about as an artist. (Don’t worry, this is going to be a positive, or at least constructive take…)

One of the biggest changes for us this last year has been that our audiences have been international. When we were presenting in venues, we were limited to people who lived or worked in geographical proximity to the venue. In the past year, it’s been anyone with an internet connection. Sure, there’s still a concentration of European and English-speaking people, but we’ve  had shows with audiences joining us from three continents. For a company like FF, who make audience-centric work -i.e. work where the interactions of the audience are the artwork- that’s incredibly exciting. We’ve had people from very different cultural contexts discussing surveillance, justice and the ethics of artificial intelligence. I think one of the reasons we make audience-centric work is because I used to get bored of regular theatre, whereas audience-centric stuff is endlessly interesting because of all the different things that different groups say and do - and these performances with international audiences have been at the richest end of that.

We think that online performances are going to stay a part of what we do, so one of the things we’re thinking about now is how to make work with an awareness that it will be encountered by audiences from very mixed cultural contexts. And actually the subjects we’re drawn to are inherently international conundrums - climate change, the flows of data and information, the legacies of colonial exploitation by the global north aren’t neatly delineated by national borders. I think I’d go so far as to say that if you’re making work concerned just with national perspectives, that’s a choice, because our lives are affected more by international forces than they are by national ones.

Of course, this narrative suits my personal concerns as well. I’m one of the many Brits who was devastated when 52% of the UK voted to leave the European Union. I know people who in the March 2021 census marked their national identity as ‘European’ to register this. I couldn’t quite bring myself to do that but since June 2016 I’ve come to realise how being ‘in’ Europe played a big part in how I thought of myself.

I was lucky enough to get an EU grant to spend a gap year in Spain before I went to university. It’s one of the hardest things I’ve ever done - I was desperately homesick for the first month, but by the end, I didn’t want to leave. I did a huge amount of growing up - being in a different country far from all your support networks (and pre-smart phones) teaches you how to get by in all sorts of adverse circumstances, but also about who you want to be, because you’re making a lot more active choices than when you’re coasting along in your comfy ‘home environment’. I think it’s something that all young people should have the chance to do - and sadly that’s going to be much harder now.

FF spent the last weekend of February 2019 in Paris, presenting an artwork. It was the last trip we made before everything shut down. I look back with so much happiness and also kick myself that I totally took for granted wandering around the Pompidou Centre and croissants for breakfast. When Jan 2021 slunk around and the UK officially left the EU, I think many of us were so mired in COVID that it didn’t feel real. We couldn’t go anywhere anyway, so what did it matter? And then, people started to realise just how hard it’s going to be, certainly to work in Europe. Our Syndicate format shows have to be some of the most portable artworks ever (12 iPads, a router, and MacBook in a old bag of Joe’s, so no one realises it’s worth stealing) but now -because of the value of the kit- we’re going to need a carnet which means £££ and admin headaches.

But it’s more than a loss of concrete ‘opportunities’. The decision to leave Europe felt like a closing down, a looking inward, a declaration that we weren’t interested in all those perspectives, cultures, food and all sorts of other amazing things. I’m aware that the EU is not perfect, but there was something symbolic about that choice, like choosing to go back to black and white when we’d been living in technicolour. I found myself conducting tiny, private acts of resistance - seeking out art from other places (especially since COVID and so much more is online) and doggedly learning French on Duolingo even though a. my progress is glacial; b. I don’t know when I might next get the opportunity to use it; c. that green owl is a massive troll. I think for me, encounters with other cultures are about feeding my curiosity and remembering that things can be different to how they are currently in my immediate environs. Who’d want to lose that? And what are the spaces where we can keep it happening? For us, of course, this links to the presentation of art in online spaces.

FF’s recent work has been pretty narrative-driven. A few years ago, we made quite a few projects which were about ‘encounters’, or to be less pretentious, people meeting each other and exchanging something. Back in January 2021, a month I remember as one painful blur of funding bids, we made an application to MediaFutures, European innovation project supported by the European Union’s Horizon 2020 research and innovation programme. Because of the aforementioned swamp of applications, we nearly didn’t do it, but we knew that because of Brexit, this first round was the only chance we’d have to apply to the fund. We were totally overjoyed to be selected - to make a project which is about creating space for conversations; about bringing anonymous participants together across national and linguistic boundaries to prove that things can be different, that we can be better than we are.

I’m not very good at talking about hope in the abstract or actually at feeling it if I’m honest, but I’ve learnt that the way to hijack downward spirals is with action - because once you’re doing something invested in hope, your aversion to good old cognitive dissonance means that you -or I in this case- can’t help feeling more hopeful. So in this age of increasing isolation, conflict and disinformation, the project that we’re making, Social Sandwich, is a week-long experiment in curiosity, kindness and critical thinking - and a refusal to turn inwards. It’s good to be making a project about ‘encounters’, because actually those spaces are ways of resisting.

There’ll be more on the Social Sandwich project soon, including some invitations to help us build these spaces, but right now Duo is sending me increasingly passive aggressive messages so à bientôt… 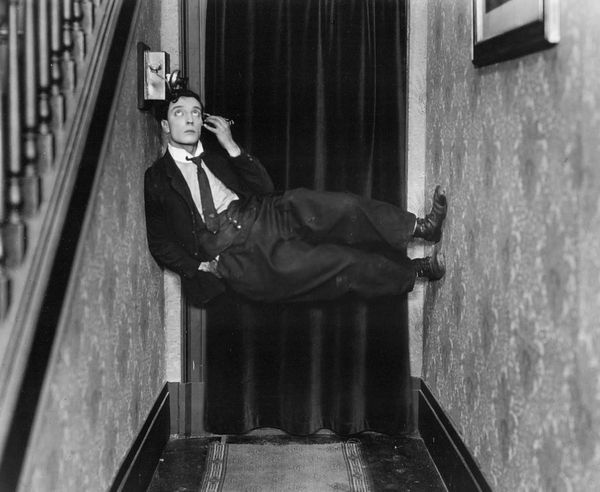 I have a feeling that when you’re making comedy, it's harder to get people to take you seriously. Via Aristotle and Buster Keaton, here's my theory why...