After a 3 week run of our digital theatre online courtroom show, The Evidence Chamber, we reviewed what we’d learned about working with for online audiences. The specifics pertain to that show but the general lessons are more widely applicable, so we thought we’d share.

You can listen to Rachel reading the full post here:

1. If you make digital theatre for online audiences, not everyone will be able to access it

Using technology creates barriers to access. In order to play The Evidence Chamber online, you need a computer (not a tablet or phone) and decent WIFI. Not everyone has this. In Byker, two metro stops from where we lived outside Newcastle (and home of the legendary Grove for all those children of the 90s), there is, on average, 1 smartphone and 0 computers per 7 people. None of those people could have played The Evidence Chamber.

There is a bigger conversation to be had about access online - but also infrastructure in general. The architecture of digital theatre show The Evidence Chamber is a computer and need for internet - just like the architecture for traditional theatre is a building that you have to be able to access. This isn’t just about getting in the building, it’s about getting there and getting home. We had a production assistant placement who lived in a town outside Newcastle called Corbridge. He didn’t drive. The last train from Newcastle to Corbridge leaves at 21.25, making it impossible to see a 2 hr show at any of the city’s venues and get home. So let’s have a conversation about all the infrastructure we don’t have. I’m not saying this to deflect from our own digital exclusions, but to illustrate that it’s complicated.

Pop your email in below and it's yours!

To make it less scary, we had an email and phone number that we encouraged people to use to contact us with any concerns about technology. Lots of people did this prior to buying tickets, as well as just before and during the show. Joe built tools so that he could diagnose problems remotely - and sometimes even fix them before online audience members noticed.

3. You can’t build digital tools for access online if you don’t have enough time

We tried to build various access features (e.g. embedded AI captioning for discussions) into the platform, while trying to build it, on a very tight schedule. It wasn’t achievable. Now we have the platform we can look at improving access. We were also trying to build access features without having consulted users on what would be useful. In short, we didn’t have enough time. We’ve learnt to allow more. (All the videos were captioned and we saw high use of this feature bu online audiences… which might have had something to do with Dundonian accents in The Evidence Chamber.)

4. You need to think about what types of digital theatre you feel OK with people experiencing in remote locations

We chose to use The Evidence Chamber as the first piece we did in this remote courtroom format. We could have used The Justice Syndicate, which is a piece we’ve done multiple times with face-to-face audiences. But we decided against this: The Justice Syndicate is a sexual assault case, with some tough content. Discussions can be robust and potentially difficult. We imagined someone playing, it affecting them profoundly and then being sat alone afterwards with all those feelings. We didn’t want that. The Evidence Chamber is a murder case but the nature of player interactions is collaborating to piece together a story, rather than arguing about a moral dilemma.

In the run-up to the show, we were working on our accountability policy. We had ‘In purchasing a ticket to The Evidence Chamber, you are agreeing to abide by our Accountable Spaces policy’ on the booking page, with a link to the document. Some people read the document (they told us), but I would imagine not all. We planned to read the policy at the start of each show but we didn’t because onboarding already took a long time and we were worried it might scare people into silence. I don’t really know what we should have done. (There is a moderator and an in-game mechanism for accountability, so we weren’t totally leaving people to their own devices.)

During the discussion sections in The Evidence Chamber, players use a video chat platform. Beneath each person’s video is the label ‘Juror X’ - with a number from 1 to 12, and the pronouns that the person has chosen. We could have had the person’s name - they could have entered it at the same time as choosing their pronouns. However we had feedback from people with non-English names that they felt during discussions (face-to-face, in other situations, before the pandemic) that they weren’t called on because the person chairing the discussion (who was often white and English) was worried they would pronounce the ‘difficult’ name wrong. So although it is slightly weird to be referred to as a number, we decided this was preferable to a situation where people with English names got more airtime. Access online is a complex thing - and we can learn useful lessons for face-to-face interactions from it.

It’s not much fun trying to explain this to someone who has in all good faith bought a ticket to a piece of digital theatre thinking their internet is fine. We did provide a link for people to test but not everyone does - and, not to get too technical, there can be a massive difference between upload and download speed that messes things up. What we’d like is to have a speed tester as part of the ticket buying process - which would simply not allow people with slow internet to proceed to purchasing (sounds harsh, but much better they find out before than during the game) but these are very hard to build. It’s on the list of access online tools though…

8. Sometimes you have to choose between aspects of access

One of the things we really thought about was how we could avoid a situation where one person dominated the conversation - we have all been in Zooms like that, and it’s not fun. We had the idea of a border around everyone’s video, which would fill up and change colour according to how much they had spoke - at a glance, you’d be able to see if you had spoken more than other people.  Joe built it as a design feature and we really liked it. It felt different to the regular platforms people use - and more geared to equity. But people weren’t used to noticing it - and it also needed a lot of processing power. Some people’s computers wouldn’t handle it on top of everything else the platform was doing. It might mean that those people would not be able to take part. We cut the feature: while it might help people share the airtime better, less online audiences overall would be able to play.

9. A bit of awkwardness is OK if it means a more equitable space

When we play The Evidence Chamber as face-to-face rather than online digital theatre, we don’t have a foreman (this is term for the ‘chair’ of a jury regardless of their gender.) For the online game, we chose to. We also built a ‘hand raise’ function into the platform, to enable the foreman to see more easily who wanted to speak. The hand raise function initially felt awkward - but we had feedback from various online audience members that they found the format easier than a face-to-face discussion, and participated more because of this. The additional structure created a more level environment: free-flowing discussions are easy for some people but not for others, and if we’re interested in equitable environments, maybe we should have more structure or at least declare the rules of a space? Maybe a bit of initial awkwardness is the price the worth paying for more people being able to participate.

10. There are things you can’t control

We had an absolute horror of a dress rehearsal three days before the first real show - everything went wrong. We realised that we’d built the system as a sort of binary: it works/ it doesn’t work, with the expectation (based on previous testing) that it would work. What we needed to have done is built the system for ‘when it goes wrong’, not for ‘if it goes wrong’. So Joe spent the three days before our first show building a whole suite of tools to enable him to help online audience members when things went wrong. This was mentally a very big shift for us to make - we’re all perfectionists and very tough on ourselves. But when people are playing on their own devices, on varied internet connections, there are so many factors you can’t control - so you can’t see things going wrong as an indication of your failure as a maker. We learnt to approach each show with the attitude ‘what will go wrong today? and how can we fix it?’ rather than ‘if something goes wrong, we are the worst artists ever and it’s game over.’ It also feels like a better starting point for access online: not ‘this is the only way this can work’ but ‘here are the different ways and different tools we can build to make the experience work for different people’. 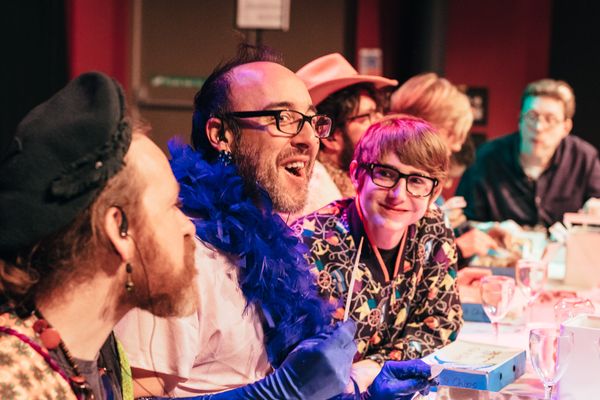 In traditional theatre, the audience’s main job is to watch. But when you’re making experiences for interactive audiences, there’s a whole lot more to consider.

The how and why of multimedia theatre - and a few tips on what we’ve learned while making digital performance (face-to-face and online).